The history of religion and religious practices is as ancient as the human civilization itself. Nobody knows whether the origin of this concept of religion has been human-made or was through divine Providence, but ever since people started living in congregations, their beliefs paved the path for the worshiping of the ‘supernatural’ or the deities they considered superior to the mortal world. The religious classification has not been a part of the ancient classification that our ancient primitive society had. The first ever social classification we get in Hinduism remains that of the ‘varna,’ i.e., Brahman, Kshatriya, Vaishya, and Shudra. But these were based primarily on the occupation of the person and not of religious preferences. With the rise of the population, human beings began initially worshiping the natural elements from which they could procure means of survival. All of them belonged to one religion where Nature was the sole deity.
An example of this is found in the worshiping of a Hindu Goddess named ‘Vanbibi’ who is supposed to be the Goddess of the forests. Thus the deity or the idol culture came into being as people who followed no particular religion began to place their faith into embodiment of what they saw as Nature. And with this came the concept of ‘God’ or the creator. As different representatives of the ‘God’ were put faith in, the practice to ‘satisfy’ them for self wish fulfillment arose. The people primarily desired the need to satisfy these Gods for protection from mishaps and prosperity. As a result, religious practices and rituals came into being.
Even in the Twenty-first-century religion holds its place firm and resolute. With the evolution of religion, religious practices also came into existence, and people start having faith that these practices provide prosperity and luck. Almost every religion has a set of rules or rituals singularly unique to it. Many of these rituals are also dedicated to specific deities so that they bless people and fulfill their desires. With the demarcation of socio-cultural boundaries among st countries, these rituals have been noticed and studied globally, and it has been found that many of these rituals which are believed to help in the long run are not just bizarre but also painstakingly dangerous. They involve a high risk of death, and most often a disturbing one.
Following are the top 10 most disturbing or agonizing practices of the world-

In Quebec, young boys of the Algonquin Indian tribe are taken to a secluded area to intake the plant mixture called Wysoccan(derived from Jimson weed). The importance of this ceremony is that young boys should forget the memories of childhood and enter into adulthood. This ceremony marks a stage of separation of childhood and adulthood time span of life. The masochistic and the conventional mindset of male power and strength is thus put into their minds from an early stage of life.

2. Baby Throwing
Baby Throwing practice is followed in the state of Maharashtra, in India. It is a weird ritual performed by mothers on their infants. The babies, barely a month or two old are thrown from a 50 ft tower. There are men appointed beneath the tower to catch the children. But the chances of severe accidents remain high. The ritual is believed to bring the babies luck and prosperity, even though it involves a high risk of not being able to be alive to savor the former.

3.Scarification
As evident by the name, the ritual includes making scars and marks in the body, often resembling symbols or chants of some specific deities. These scars or marks often made on the person with needles and without anesthesia tend to remain engraved on the skin for a lifetime. The body parts for scarification are arms, fingers, neck in case of females and chest in case of males. The practice is pretty common in countries like India even in the Twenty-first century.

4.Flagellation
Originated in Egypt, Greece, and Rome, this is a harrowing ritual that is believed to be a part of the punishment or rather penance in front of the Almighty for all the sins committed. It is an act of beating the human body with rods, lashes, switches, etc. In Islam, it is practiced on the tenth day of Muharram where people brutally use whips on themselves, often to the point until blood oozes out of the wounds. Such a violent scene can blow anyone’s mind. 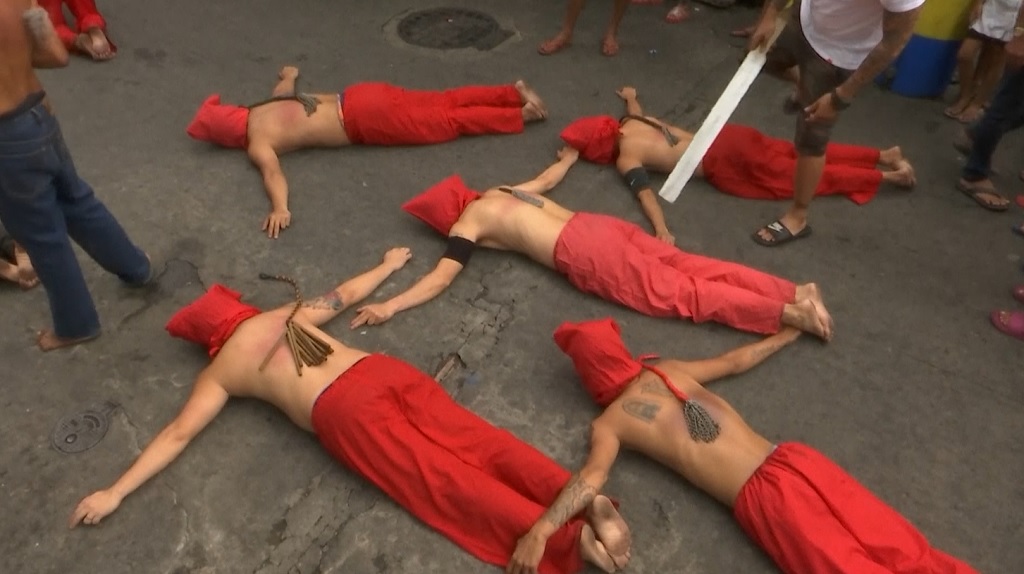 5.Garudan Thookkam
The word ‘Garuda’ is a Sanskrit word which means an eagle. Eagle is a bird methodologically supposed to be the vehicle of Lord Vishnu. This ritual is performed in the central Kerala district in south India. The ritual of Garudan Thookkam is performed in the temples of Lord Vishnu. It was believed that when Dharika was slain, Kali remains thirsty. So Vishnu send Garuda to Kali to quench her thirst. Garuda went dancing and bleeding to Kali, and kali get pacified after drinking a few drops of blood from Garuda. So this Garuddam Thookam ritual is performed based on this belief. The practice includes devotees to be pierced with sharp metal hooks into the bare skin and to be hung in the air like an eagle resembling the vehicle of Lord Vishnu.

6.Okipa Ceremony
This is a very torturous practice performed to seek approval for the spirit. It is presented in the United States of America, Okipa Ceremony is yet another ritual which includes the contact of metal hooks and bare skin. This ritual is perhaps a level up in the pain scale because, in this ritual, people are pierced and are hung to the roof until they faint. Also, they are supposed to have a smiling face even in such a situation. This ritual continues around three to four days, and once this ritual ends, then it means that the person has got approval from the spirit.

7.Sun Dance
There are probably no rituals more brutal than those which include metal hooks. Sundance ceremony includes fasting, piercing, dancing , staying in the camps for many days, etc. The purpose of offering personal sacrifice is for the benefit of family and community.

8.Circumcision
Circumcision refers to the removal of the foreskin, covering the head of the penis in males whereas, in females circumcision, the skin covering the clitoris is removed. In the newborn baby, the procedure takes about five to ten minutes whereas adult circumcision takes approximately about one hour. The circumcision generally heals in five to seven days. In religions such as Judaism, the process is followed on the eighth day of the birth. The medical pros and cons of the process, however, remains debatable. In Islams, it is believed that Prophet Mohammad was born without foreskin so devotees under circumcision.

9. Female Genital Mutilation
FGM means cutting of female genital or female circumcision. This religious practice found in Africa, Asia, and the Middle East, is often regarded as one of the most bizarre and gruesome methods involving women. It is perceived in general as being connected to Islam but is also followed by some Christian groups, Ethiopian Jews and African communities. This process details initially found in 163 BC in countries like Egypt and Sudan and Kenya. The process is generally carried out by older women and includes partial or total removal of the external female genitalia. This practice rooted to control women’s sexuality. Many health issues also come depending upon the procedure followed.

10. Subincise
The Aboriginal tribes in Australia were mostly seen indulging in this religious practice. The process includes slitting the entire length of the penis and opening up of the urethra. The even more unbelievable part of the ritual is that no anesthesia is used during the process. The masochistic and conventional view of male strength is hailed as the pain and blood that is involved in the process is seen as a symbol of status among the tribesmen.

Apart from all these disturbing rituals that are carried out on human beings, there also many religious practices which are also performed in which animals are included. The most common of them are the sacrifices of these innocent animals where creatures are bathed and worshiped and then offered as a sacrifice to the deity. This ritual of animal and sometimes fruit sacrifice is prevalent in India.

Whether human beings or animals, the fact remains that these rituals even though they are disturbing and frightening to the core are followed extensively all around the globe and in different religions for wish fulfillment. The therapeutic effects of these rituals are more often than not, negative. The extent of faith and superstitions that go into the existence and continuation of these rituals, however, makes people overlook all the hazards of it.

10 Ways To Help Someone Coping With A Parent’s Death

Death is unavoidable and unpredictable. You would never know when someone will die. Though average human life is 75-80 now …

TOP 10 Common Interview Questions And How You Can Answer Them

Generally, you feel very nervous before going for an interview and often think about the questions which the hiring managers …

Pet Peeve is rather a relatively new term that has become quite common in our day to day conversations. It …

People say matches are made in heaven. We hunt for our ‘match’ or the perfect partner throughout our life. Yes, …

10 Foods That Boost And Sharpen Your Brainpower

A balanced diet is extremely important to keep our health balanced as well. We cannot miss out on the nutrition …