Football is the most popular sport with millions of fans throughout the world. Since it is one of the most watched games in the world, the footballers get to earn huge wages. And there are massive amounts involved in football player transfers from one club to another. Most of us begin to wonder where these football clubs get such a sum of money. The clubs make such enormous amounts of money yearly through sponsorships, TV Rights, merchandises, through tickets, etc. Apart from the players and staff, there are plenty of people who help in the smooth running of the club and at a high profit.

The Deloitte Football Money League had recently published the list of top 20 richest football clubs in the world. Real Madrid has beaten the former highest earner Manchester United in total revenue for the 2017-18 season. Both Real Madrid and Barcelona have leaped over Manchester United which is now holding the third position — dominating the Deloitte’s ranking list, six of the English Premier league made into the top 10 clubs. 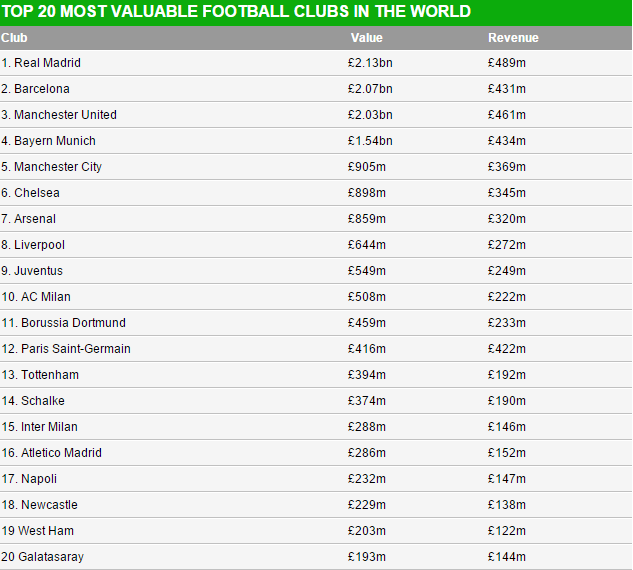 It has been the first time that Tottenham Hotspur has made it to the top ten lists by knocking Italy’s most prominent club Juventus to number 11. The Tottenham Hotspurs football club was founded in the year 1822. It plays in the premier league and has won its first Title in 1901. The North London club has a continuous year-on-year growth much owing to the broadcasting deals which accounts for nearly half of its 2018 revenue profile.  It earns a yearly revenue of $485.6 million.

Unfortunately, the Gunners have dropped off from the sixth place last year to the 9th position among the top richest football clubs in the world. The primary reason being that they are no longer a part of the UEFA Champions League Club though they reached the UEFA Europa League semi-final last year. Hence, it has made a significant impact on its revenues.

Arsenal FC is a professional football club that is founded in 1866. It is regarded as the first football club to join from the South of England to join the Football League. The Arsenal FC has won numerous titles which include 13 League titles, 15 FA community shield among many others.

Chelsea is situated at a Stanford Bridge, London that always take part in a premier league. It was founded in 1985. Owned by the Russian billionaire, Roman Abramovich, the club has been ranking within the top 10 rich list for consecutive years. It has won various league titles including 7 FA Cups, 1 UEFA Championship cup among many others. Team Chelsea finished fifth in the English Division.

The current revenue of the club attributes to the sponsorship deals with drinks firm Carabao. The club also has some other massive sponsorship deals including Nike and Yokahoma. It also has a loyal fan base which helps in keeping their revenue healthy.

Liverpool is an English Football club currently competing the Premier League. It was found in 1882. The Liverpool based club finished 4th place in the Premier League last season thereby making it into the UEFA Champions League Final. Due to their successful performances on the pitch, they have been able to get increased revenues as well as long term loyal fans.

Paris Saint Germain or as popularly known as PSG plays in the French Ligue 1. This club was founded in 1970 and is presently owned by Qatar Sports Investments. Paris St Germain has won 33 trophies. The bulk of PSG’s revenue profile came from financial deals. Also bringing Neymar into the club, one of the biggest deals in professional football has also helped them to be in the top 10 richest football clubs.

When founded in 1880, Manchester City was known by the name St. Mark’s. The name was later changed in 1894. It is currently based at Etihad campus, East Manchester. The Abu Dhabi owned club has breached the top 5 richest football clubs for the second year in a row. It won the Premier League last year. Its shirt sponsor is Etihad Airways and technical supplier kit Nike.

The full name of this club is Football club Bayern Munchen. Bayern Munich was founded on 27th Februray 1900 by 11 football players, led by Franz John. It was one of the successful German sports clubs in Bayern. It has a record of 28 national titles and 18 national cups. It was well known for its professional football team

Having made less revenue comparatively from last season, Manchester United has landed at the third position from first last year. However, they remain the wealthiest football club in England.

The club which is also known as Man U or Red Devils was founded in 1878. Manchester United has won numerous titles and awards. Most of the club’s revenue profile comes from its financial and broadcast deals. Their shirt sponsor is Chevrolet, and Adidas supplies its kits.

The club based in Catalonia, Spain was founded in 1899. Barcelona is one of the three founding members of the Spanish La Giga. It is fondly called as Barca by its fans. The club is always in the top 5 rich list and witnesses year-on-year revenue growth. With some of the biggest names in football such as Lionel Messi and Suarez, thus club is loved by many people all across the globe. Barcelona has seen a lot of good seasons and league titles. It has 102.7 million likes on Facebook, 29 million followers on Twitter and 63.8 million followers on Instagram.

Real Madrid, a professional football club based in Madrid, was founded in 1902. Initially, the club was named as Madrid Football Club. It was changed to Real Madrid by King Alfonso XIII in 1920. The word ‘real’ means “royal” in Spanish. Real Madrid club is one of the most widely supported football teams in the world.

The club is one of the three founding members of the LA Liga League and has always remained as one of the top 3 clubs in the League. It has won more than 30 LA Liga titles. Its third successive win in the Champions League has made it the wealthiest football club in the world. Besides, it is also the most followed club on Facebook, Instagram, and Twitter.

Flash drives have replaced heavy disks for storing and backing up data. Whether we talk about employees working on laptops …

10 Ways To Help Someone Coping With A Parent’s Death

Death is unavoidable and unpredictable. You would never know when someone will die. Though average human life is 75-80 now …

TOP 10 Common Interview Questions And How You Can Answer Them

Generally, you feel very nervous before going for an interview and often think about the questions which the hiring managers …

Pet Peeve is rather a relatively new term that has become quite common in our day to day conversations. It …

People say matches are made in heaven. We hunt for our ‘match’ or the perfect partner throughout our life. Yes, …