The world of cinema is an ever changing one, there was a time when female characters were ancillary to their male counterparts but thankfully we are done with that. Now the roles are more evolved, most of them have redefined stereotypes and changed how we categorize them. The world is still obsessed with leather wearing assassins who trot around in pumps and simultaneously, it gives a chance to real heroes as well. Badass women cracking story lines like some super hero on crack, may it be the action scene or challenging the authorities to bring about a change, these women have done it all.  Here is a list to help you get your motivational clock on:

15. Miranda Hobbes in Sex and the City Series

The Sex and the City series was all about 4 friends trying to find their way through life in the crowded streets of New York. One of them, Miranda who is played by Cynthia Nixon, is a Harvard Law graduate who has a rather cynical view about men and life in general. Her character subtly teaches us how to be comfortable in our own skin. Her strong sense of individualism is put on display in the series several times such as when she battles an STI with her head held high or when she decides against abortion to become a single mother or when she stood up to a sexist boss.

This biopic was about an Indian female boxer coming from a small city in the country. She went on to win several titles in boxing and even bagged few National Awards for her talent. This hard core lady not only fought poverty as a child but also conservative reluctant parents, ignorant authorities and impatient countrymen. The character in the movie is played by Priyanka Chopra and she does it to perfection. This story proves that women are capable of being bad-to-the- bone fighters when they desire to do so and no obstacle can hold them, especially not their own bodies.

So, this might not be your regular run in the mill bad- ass woman character but she sure should find a way in this list. Played by the innocent looking Meenakshi Sheshadri, Damini is a simple Indian girl married to a wealthy guy, who finds herself in a moral turmoil when she witnesses the rape of her household help. Her perfect world goes to hell when she decides to speak against the guilty party who was her husband’s younger brother. Her character shows such courage in protecting the rape victim and fighting her battles for her even after being abandoned by her parents. What can be more badass than that?

Julia Roberts makes difficult look so flawless in this biopic where she plays an unemployed environmental activist who is taking her care of her 3 children singlehandedly. Her character, Erin is based on the woman who brought down a corporate giant to save people from dying a painful death from poisoning. She goes on to be a deadly legal consultant and television personality, all this without any formal education or support. Well, that has her pinned down as freaking awesome in our dictionary.

11. Leigh Annie in The Blind Side

If someone can make a Suburban housewife look deadly, it is Sandra Bullock. Her character in the movie is a wealthy lady who decided to adopt an adult child from the hood. Her soft side is explored when she encourages the boy to educate himself and also pursue his other interests such as football. Leigh shows the whole world how dangerous Mama can be when she decided to fight the local gang who was trying to enroll her adopted son. At one point, she shoves their gun in their faces. What now!

10. Olive Penderghast in Easy A

The character of Phoolan Devi, played by Seema Biswas, starts out as a helpless victim to rape, harassment, torture and murder and completely lost in the wild life of the woods where she resides but as time passes, she emerges from her own ashes as one of the most feared gang leaders in the area. She builds herself and a group of ruthless men around her to in order to gain access to revenge and power. Her journey documents how she manages to turn the tables and rule men who live to kill on their own land. Moreover, the character is very much real. Wow, talk about the power of a scorned woman.

8. Laila in Margarita with a Straw

Kalki Koechlin plays a teenage girl suffering from cerebral palsy, who decided to not let this break her down. Laila overcomes rejection and heartbreak by getting a scholarship abroad and meeting new people. The character, later on announces herself as bi-sexual and proves that there is enough fire in her to fight another day for what she wants. There is no mountain high enough, is there?

7.Selene in The Underworld Series

Kate Beckinsale plays a leather-clad vampire soldier, trained to perfection so that she can protect her tribe from the big bad wolves. Yeah, like that happened, Selene goes all out and rebels like a pro. Falls in love with the enemy, gets rid of the hierarchy, kills her own, gets her revenge and starts a war but let’s be honest, her heart was always in the right place. She is the perfect example of an immortal who knows no pain, Kate’s character keeps the fight on even after losing her husband and a hybrid daughter. We love how she breaks all rules and man’s up to even ask humans for help. A Sexy Rebel, yes please.

6. Minny Jackson in The Help

The chubby full of life Minny is a black maid during the times when just being black was a crime. Octavia Spencer adds life to the character in the movie. She stands up against racism, child abuse, domestic violence and man, does she do it in style. The most talked about scene from the movie still remains the one where she serves her former employee a pie made from her own shit after being fired for using the toilet during a stormy night. We do not advocate revenge but if we did, this was the most -wicked of them all because strong women take no shit (pun intended).

5. Rita aka Angel of Verdun in The Edge of Tomorrow

It is an achievement in itself to over shadow a character played by Tom Cruise trying to save the world (mainly because he does it so often, we won’t be surprised if he ends up saving us one day). Emily Blunt plays the strong and ruthless iron soldier whose only purpose is to kill the freaking aliens and of course, she does it looking like a Goddess. Thumbs up for not falling in love with the hero like typical movie character and instead killing him numerous times to get the work done.

We just couldn’t let Angelina Jolie stay out of this one, I think she ensured that when she killed a target dressed up as a sexy bondage-inspired superior before doing a superhero jump out of the window. A highly efficient spy who knows everything from kung-fu to karate. Having a delicious husband is always a plus and fighting him that is what got her here.

Zoe Saldana plays a little girl who witnessed her parent’s murder as a child, which makes her go crazy for blood. She trains herself to become a feared assassin and eventually, gets her revenge too. The movie starts with her pulling off an impossible task inside a jail, dressed like a hippie and that is what makes her awesome and third on the list.

Who said a villain cannot be up here? Lucy Liu made us agree to that when she played a gang leader in Kill Bill, her character was once a part of a killing squad who couldn’t do their job right but let us focus on her for a minute. No Godfather, epic sword fighting skills, no fear of the men in the business and a badass reply to racism– What’s not to like?

It is no surprise that Uma Thurman’s character in that yellow spandex outfit has won is over. When after being in coma, she bites off the lips of the guy who was trying to kiss her or instructs her paralyzed thumb to move, no one thought it could be better than that but it’s the bride so obviously she enters a restaurant full of people by cutting off an arm. What came after was treat to the eyes. She is by far the most badass woman to have taken our hearts out of the chest cavity. 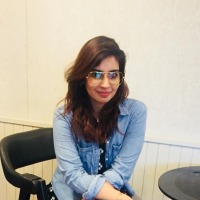 A CS in the process of becoming a CA who works part time as a content writer and loves to design ethnic wear. So basically trying everything I can get my hands on and enjoying the ride while at it.